The 2021 Oration is to be delivered by General the Honourable Sir Peter Cosgrove AK AC (Mil) CVO MC (Retd), who has released his memoir, You Shouldn’t Have Joined.

The Patrick White Oration is a major, stand-alone literary event that forms an important and integral part of the Scone Literary Festival.

The Oration celebrates the work of Patrick White, Australia’s only Nobel Laureate for Literature and recognises Scone’s strong literary heritage.

With thanks to our sponsors: 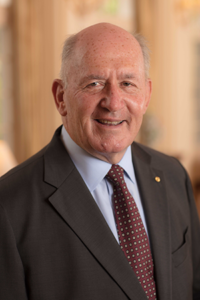 You Shouldn’t Have Joined…

General Sir Peter Cosgrove AK, AC (Mil) CVO, MC (Retd) is one of Australia’s most significant public figures. As a soldier he saw action in Vietnam, winning the MC, and rose to the very top of his profession, becoming Chief of the Defence Force. Upon his retirement from the army, he immediately took charge of the huge relief and rebuilding operation in Queensland after the devastation of Cyclone Larry.

In 2014, Cosgrove became Australia’s Governor General. As Governor General he travelled far and wide, supporting Australians in times of crisis, sadness, joy or celebration, representing us on the world stage with humour, intelligence and a force of personal magnetism that was felt by everyone from the Queen to US Presidents.

When he retired in July 2019, it was as one of the most beloved and respected governor generals in Australia’s history. Cosgrove represents the traits we truly value: warmth, humanity, toughness and loyalty. His humour and empathy shone through the pomp and ceremony, and his time as Governor General will be remembered as much for his laughter as for the usual dignities of the office. 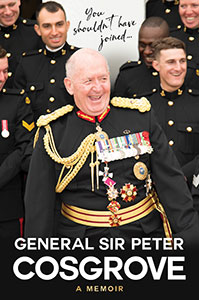 This book is the memoir of his extraordinarily full and eventful life, covering some of the military life that featured in his 2006 bestseller, My Story, but in a way that reflects how his perspective has since changed—whilst also allowing us an incredible insight into the role and world of Australia’s Governor General.

Cosgrove was there as three Prime Ministers were toppled by their own parties. He was there through disasters both natural and man-made, such as the destruction of MH 17. He was there for world leaders, and for ordinary Australians. This book is the story of his life and experiences, written with intelligence, forthrightness, compassion, and a brilliant eye for a telling anecdote.

Thank you! Please check your email to confirm your subscription.