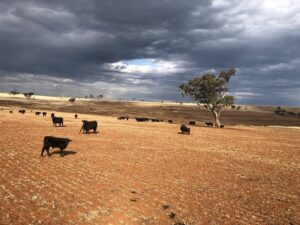 Daisy awoke to the sound of Ed Sheeran singing on her phone, a pleasant start to any day. After her morning run, (which seemed to be getting shorter as her years increased) she gave the work dogs a walk before preparing the feeds for the four horses who were waiting at the house paddock gate for their breakfast. As she prepared her own breakfast in the rambling old farmhouse kitchen where she and Fred had lived for the past 30 years, she rang the vet to make arrangements for his visit to the sick cow that she had brought in last night. Fred was going off to a ‘Farming field day’ so he left after his breakfast.

After letting the chooks out, turning on the hedge irrigation and saddling her horse, Daisy did her daily ride around the hill paddock of 130 calving heifers. She was on the lookout for anyone getting close to calving or having trouble calving. The heifer with ear tag number 801 looked a bit tight in the udder and with pin bones dropping, Daisy thought she would return later to check her progress.

On her way back home, she checked the water tank levels and cleaned out a trough that was also leaking, but with a bit of adjustment to the float valve, she soon solved that.

Daisy was nearly home when she noticed the fallen branch on the boundary fence. She dismounted and tied her reliable grey mare to a nearby tree whilst she heaved the branch off the fence and with a twitch of the strainers that she always carried in the saddle bag repaired the broken fence.

Once remounted, Daisy was nearly home when she noticed that one of the newborn calves had got through to the wrong paddock, whilst her mother was stressing in the paddock with the older calving cows. She gently mustered the cow along the fence towards the gate knowing that the calf would duly follow, this worked well, and she cantered ahead of the cow to open the gate and re-unite the pair. It was always a rewarding sight to see cow and calf reunited and the calf ‘latched’ on to the cow’s udder with great fervour. When closing the gate, it jumped off its hinges due to the post moving due to the dry dirt caused by the drought. She dismounted and after some time balancing the heavy gate to get the right angle, managed to get the gate back on the hinges and she fixed the broken chain with a bit of old tie wire.

Finally home, horse hosed and away, Daisy went into the office to work on the Freight subsidy application that she had started last night. With the drought lingering in its third year, she was beginning to get the measure of the nightmare subsidy forms the government had set out in an attempt to assist farmers struggling with the added costs and dwindling incomes that were becoming the norm. Over the past years Daisy and Fred had had to sell most of their wonderful herd of Angus cattle, which was exhausting both physically and especially emotionally. It was so hard to watch truck load after truck load of your much-loved herd go out the gate. It would bring a tear to both of them with neither letting on to the other, as emotions were so raw. However, the next day they would both have a feeling of ‘relief’ that there were now less mouths on the place.

Once the freight subsidy was done, Daisy worked on the application for the extension to the bank loan which was another 20-page form and also required the word Daisy dreaded the most; ‘Budget’. Why oh why do they always want a damned budget? So, another hour on that and then she could tackle the BAS (Business Activity Statement), which was another one of those ‘always have to do’ items that seemed to haunt dear Daisy.

After lunch the vet arrived to look at the sick cow, which turned out to be, as Daisy had expected, a case of Mastitis, so she was armed with bottles of antibiotics which Daisy would have to inject daily. It was quite handy to have the vet out though as Daisy remembered that the working dogs were due for their annual vaccinations, so another job could be crossed off the list.

After another load of work clothes were put into the washing machine, Daisy remembered heifer number 801, so promptly drove out on the quad bike to check her progression. She took Floss, one of the good work dogs, just in case. After checking all of the heifers, with 2 more new calves successfully on the ground, Daisy found 801 lying down and struggling to push her calf out. With 2 calf feet showing from the heifer’s back end, she knew that she would have to get her back to the cattle yards. As darkness was not far away, and with Floss’s help, she slowly mustered the heifer back the 3 kilometres of meandering tracks, through the 4 gateways, along the fence line and into the yards, and up the race into the crush.

With a bucket of water prepared and the calving chains over her wrists, Daisy slowly put her hands inside the heifer to assess the calf’s position. As expected, there was one leg pushed back, but thankfully the head was in the right position. She managed to get both chains over the fetlocks of the calf’s front legs and wrapped the chains around the manual ‘calf puller’ contraption that she had for such situations. With gradual ratcheting of the calf puller, and with the groans of the heifer as she pushed with her contracting uterus, the team effort paid off and eventually a slimy, wet huge bull calf flopped to the ground. Daisy went into immediate action and pulled the calf away from the crush, rubbed the calf’s ribs to stimulate its breathing and did her usual trick of putting a small piece of stick up the nostril of the calf.

This resulted in the desired action of the calf coughing, spluttering and thus breathing. She cleared away the mucus from the nostrils and eyes and the steady rhythm of life could be seen as the heart continued to beat.

Daisy dragged the calf to the front of the crush, let the heifer out of the crush and Daisy felt that wonderful glow of elation that always comes when any new life comes into the world.

By the time Daisy had brought hay and water for the cow, the darkness of night had enveloped the whole farm. She grabbed a torch as she locked up the chooks, fed the dogs and cats, it was now time for the indoor jobs. However, Daisy spotted the trailer load of firewood that needed unloading, so Daisy grabbed the wheelbarrow and stacked the wood in the woodshed, a job she usually didn’t mind as she looked at it as part of her ‘keeping fit’ regime.

Finally inside, Daisy lit the fire, showered and prepared dinner whilst chatting to each of their three children and helping solve a few of their ‘mid-twenties’ problems. Daisy received a message from Fred who would be home late as a few of the men were calling into the pub on their way home from the field day and as Fred wasn’t driving, he ‘would just have to go with them’ (a familiar tale!).

After dinner, she returned to the office to do a bit more of that blessed BAS thing, before finally going to bed. Eventually Fred climbed into bed and was very chatty wanting to tell Daisy all about the enjoyable field day, and also that he had been nominated for a ‘Farmers award’, but dear Daisy was already fast asleep. 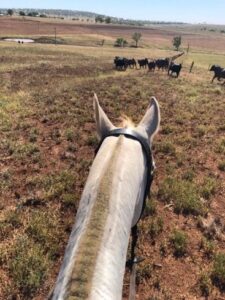