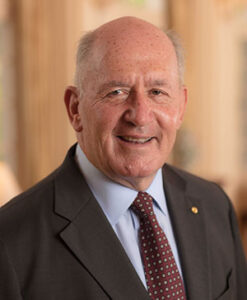 The Scone Literary Festival continues to punch above its weight with the announcement this week that former Governor General, General the Honourable Sir Peter Cosgrove, AK AC (Mil) CVO MC (Retd) will deliver the next Patrick White Oration to be held on March 13 2021.

The PWO is the second, stand-alone event to be staged by the Scone Literary Festival. The first was given by the award-winning author, Christos Tsiolkas, a major coup.

The event was hugely successful, not only attracting visitors from far and wide including the North West, Sydney and the Central Coast but selling-out 10 days prior to the event.

“We are absolutely thrilled and delighted to have a much admired and highly respected former Governor General agree to give the Patrick White Oration,” said President, Janie Jordan.

“The PWO is our most prestigious literary event and we have no doubt that General Sir Peter will deliver a fantastic address, reflecting the many highlights of his life.  .”

Allen & Unwin recently released his memoir, You Shouldn’t Have Joined … (an expression much used during his days as a soldier), the story of Cosgrove’s extraordinarily full and eventful life. It is also the story of those who have shared it with him, in particular his wife Lady Lynne, who will accompany him to the PWO.

His memoir allows an incredible insight into the role and world of Australia’s Governor-General. General Sir Peter was there as two prime ministers were toppled by their own party. He was there through disasters both natural and man-made, such as the destruction of MH17. He was there for world leaders, and for ordinary Australians.

Ms Jordan urges the local community to get in early and book to ensure that they can enjoy the Oration. “Tickets sold-out last time and we expect that the March 2021 PWO to be no exception.”